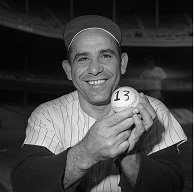 But what is Yogi best known for? His slips of the tongue. Which is understandable, if you go around saying things like “It’s déjà vu all over again!” and “I’m as red as a sheet.”

On the surface, his off-kilter pronouncements are just amusing mistakes. But look a little deeper, and you will find profound lessons. Here are a few of my favorite Yogi-isms and my admittedly liberal interpretations for direct mail success.

1. “We made too many wrong mistakes.”

Do you think Edison invented the modern light bulb on the first try? He endured failure after failure before arriving at the solution. But his mistakes were “right” mistakes. Each taught him something and brought him closer to his goal. If you’re not testing frequently and making lots of mistakes, you’re not learning anything.

People aren’t logical about the way they perceive money and value. That means you have to test not just prices, but price presentations. Which is best, $24 per year or $2 per issue? How about $7.50 per month or 25¢ per day? I recently had success presenting a $149.95 a month Internet service as “less than 1/2¢ per minute.”

Sometimes things just don’t go the way you plan. A test flops. Sales fall. And you just can’t explain it. Usually it’s temporary. The point is, don’t panic and change your entire marketing strategy based on short-term results. And never, ever discard a control until you have something that tests better.

4. “Why buy good luggage? You only use it when you travel.”
When you get right down to it, an envelope is nothing more than a container for printed matter. It carries your message to the destination and then gets ripped open. So while it can be a four-color masterpiece, it doesn’t have to be. Many times a plain old #10 is all you need.

Never confuse activity with progress. You need to map out a measurable strategy before launching any direct mail campaign. And you need to execute your strategy carefully and methodically. If all you’re doing is slapping together one promotion after another, you’ll get nowhere fast.

6. “If you can’t imitate him, don’t copy him.”
There’s no substitute for experience, expertise, or talent. If you don’t know what you’re doing, you won’t solve any problems by producing carbon copies of your competitors’ promotions.

7. “Ninety percent of the game is half mental.”

I’m forever amazed at how little thought people put into the creative process. Personally, I spend at least half of any given project on gathering information and brainstorming. When you think things through first, copy and design are a lot easier and usually far more successful.

8. “I wish I had an answer to that because I’m tired of answering that question.”
Your customers know the difference between B.S. and information. So don’t try to shovel a pile of one to cover up for a lack of the other. Give details. Answer questions and objections. Provide a means for customers to easily find out more — a website is good for this. People often make buying decisions based on a single feature.

9. “You can observe a lot by watching.”
Look at the numbers. Do surveys. Run focus groups. Talk to your phone operators. Your customers will tell you everything you need to know if you just open your eyes and ears.

10. “It ain’t over till it’s over.”
You can guess and estimate and reason and calculate, but you really don’t know anything until you run a test. If there’s one thing that’s for sure in direct marketing, it’s that nothing is for sure.

Of course, Yogi also said, “I really didn’t say everything I said.” Maybe. But who cares? Coming from anyone else, quotes like “Pair up in threes” or “I usually take a two-hour nap from one to four,” would seem stupid. Coming from Yogi, it’s pure gold.

Want to read more of Yogi’s gems? I’ve collected a few in Deep Thoughts from the Yogi.

Dean Rieck  is one of today’s top direct mail copywriters and has created sales and generated leads for more than 250 companies, including Intuit, Rodale, Sprint and American Express. For a free copy of his white paper, Getting Response in a Down Economy: 4 Key Principles to Boost Your Direct Mail Profits in Today’s Difficult Market, visit  www.DirectCreative.com