Direct mail, as with any marketing outreach, must produce leads and, it is hoped, customers. For any mail campaign to be successful, enough prospects must open envelopes and respond to offers and other calls to action. Further, in any industry that is highly competitive, a significant challenge is standing out in the crowd with a campaign that is unique, useful to recipients and with dynamic incentives to respond.

For Highmark Health, its “New to Medicare” direct mail campaign — driven by compelling messaging and formats, and appealing to a specific demographic with precise personalization — dramatically increased response rates over earlier programs, and resulted in exceptional customer acquisition success.

A MARKETING CAMPAIGN THAT IS HELPFUL FIRST, PROMOTIONAL LATER

Highmark Health is a national health and wellness leader, the second-largest integrated health delivery and financing system in America. Its affiliates and their predecessors have legacies going back more than 170 years, providing care and philanthropy throughout all 50 states. Highmark offers Blue Cross Blue Shield programs, covering individuals and families; and groups and companies. The programs have an extensive system of healthcare delivery providers that include physicians, dentists and vision-care specialists. This gives the company a particularly strong position in an extremely competitive marketplace.

A refreshed Highmark marketing campaign, dubbed “New to Medicare,” recently launched in support of its Medicare products — insurance plans meant to supplement and extend the coverage offered by standard Medicare Parts A and B. Choosing appropriate Medicare coverage can be confusing for anyone, given its multitude of choices, and more so for individuals approaching age 65 who may have been more familiar with simple company plans during their working days. Thus, Highmark’s baseline approach was to be helpful first before making any sale. The company reached out to those “New to Medicare” with information on how to enroll in basic Medicare simply and efficiently, and only later introduced them to Highmark’s own Medicare supplemental products.

Highmark hoped that a unique and compelling direct mail campaign, combined with attractive calls to action, would fit the bill. The goals were to prompt strong response, produce leads suitable for an ongoing drip marketing campaign and convert those leads into actual customers for its Medicare products. 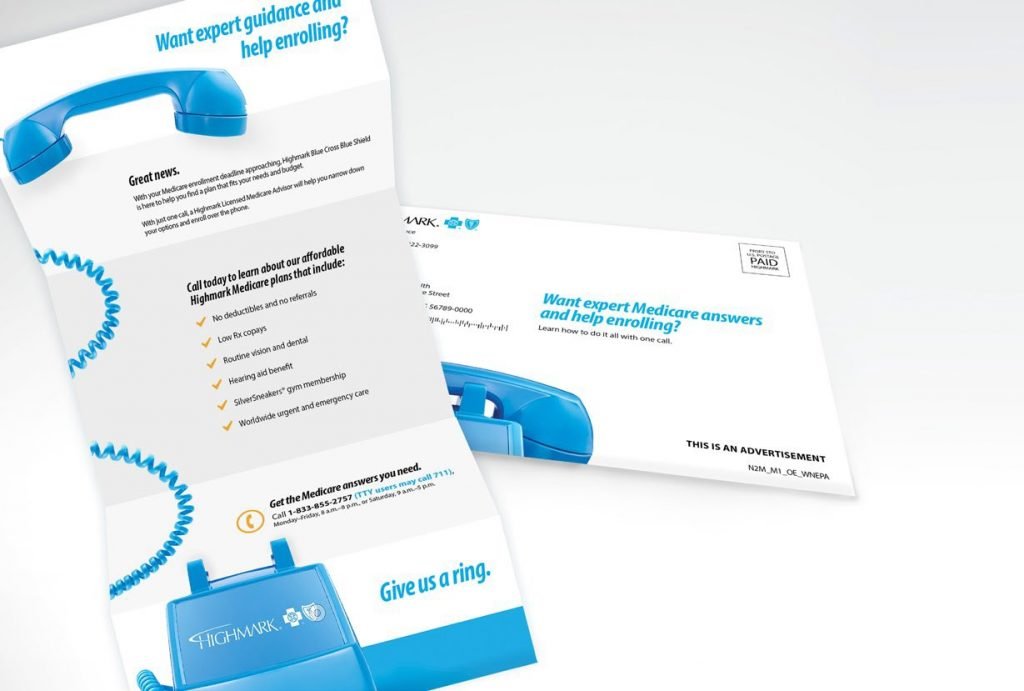 STANDING OUT IN A CROWDED HEALTHCARE MARKET

Highmark Health faced several challenges in devising its updated campaign on behalf of “New to Medicare.”

First, the market is filled with competing companies offering a wide variety of Medicare programs. People approaching age 65 typically are inundated with offers. Highmark needed to find a way to stand out in a very crowded field.

In addition, Highmark isn’t the only Blue Cross Blue Shield provider of Medicare plans. Multiple providers and their independent marketing campaigns offer diverse messages. Confusion can be amplified for those wondering what choices to make.

“When people are working full-time, their company-provided health insurance options are usually limited to only a few of choices,” notes Alyssa Hess, senior marketing strategist for Highmark’s “New to Medicare” program. “But as they approach age 65 and are retiring, they have for the first time what can seem like an endless amount of health insurance options for Medicare. We had to cut through the clutter of a saturated market with meaningful messaging and relevant content.”

Societal changes also have had an impact, creating additional challenges for Highmark. Increasingly, people are retiring later than at age 65, the age at which they otherwise would be eligible for Medicare. As a result, the shopping and enrollment is a lot harder to define, making it critical to capture as many leads as possible among Medicare-eligible people, and position Highmark distinctly and uniquely in the marketplace.

“The biggest thing in working with Highmark Health was enabling them to see the specific advantages of data that can be used in direct marketing. The applications are very robust and you can do so much with them.”

In today’s “all digital, all the time” world, choosing the most appropriate combination of marketing channels can be daunting. Demographic analysis can determine which segments of the population respond most favorably to which types of marketing touches. Younger people tend to respond more favorably to social media, for example; email is always an important channel, but not for everyone; and digital display and video ads blanket the Internet, but often are ignored or blocked.

“Even with our audience becoming more digitally savvy, direct mail still plays a critical role in communicating effectively to our prospects,” Hess says. “We see direct mail and digital as natural complements to each other that enable a true 360-degree campaign.” 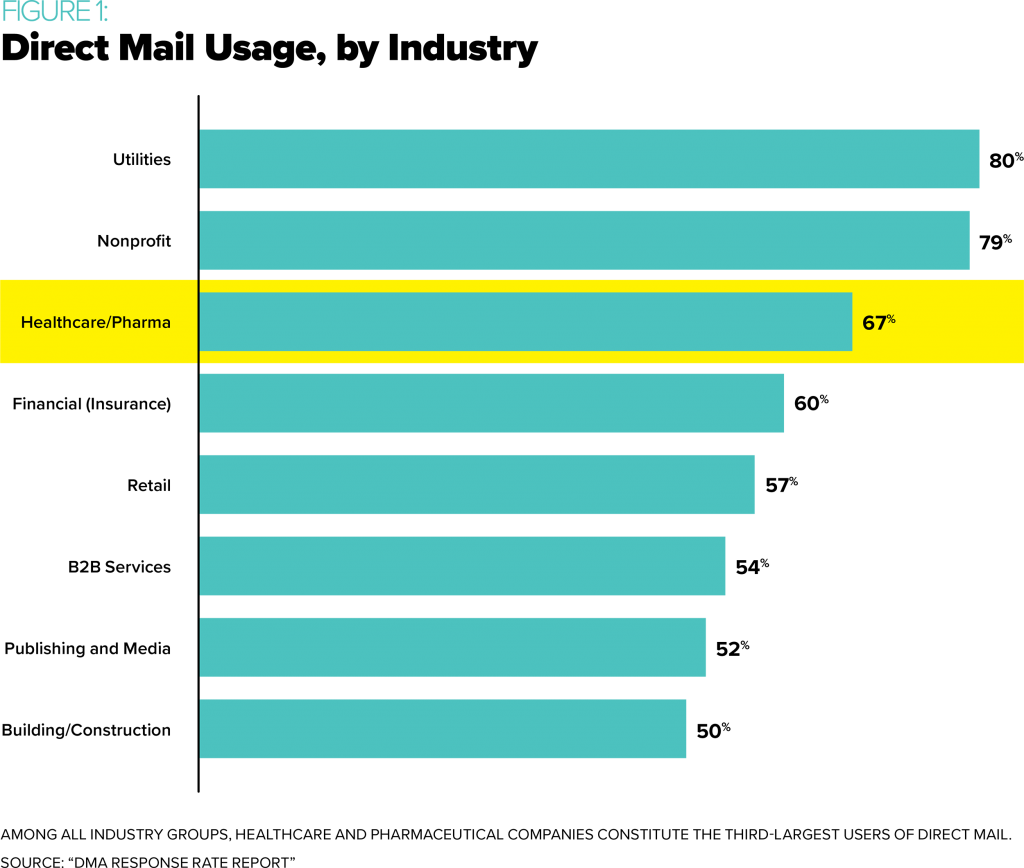 Tom Boyle, VP of sales and marketing at Heeter — the printer tasked with producing Highmark Health’s “New to Medicare” campaign — also notes the power of print. “Direct mail in general, and in the health insurance market in particular, has always played an essential role,” he says. “It allows for great personalization and a subsequent drip marketing campaign that consistently prompts great response.”

Another essential element of Highmark’s choice of direct mail was the age demographic of its targeted audience — that is, those approaching age 65. While direct mail performs strongly with all age groups, the more mature audience tends to open mail more often, a factor of which the company was well aware.

“If you think about the amount of time consumers spend engaging with a marketing piece, direct mail — if done correctly — can hold their attention and leave a powerful reminder longer than digital or direct-response TV ads, which you can’t refer back to,” says Hess. “We have seen prospects keep direct mail for weeks or even months, using it as an educational tool and point of reference. If you can get them to open the envelope, the informative content will speak for itself.” 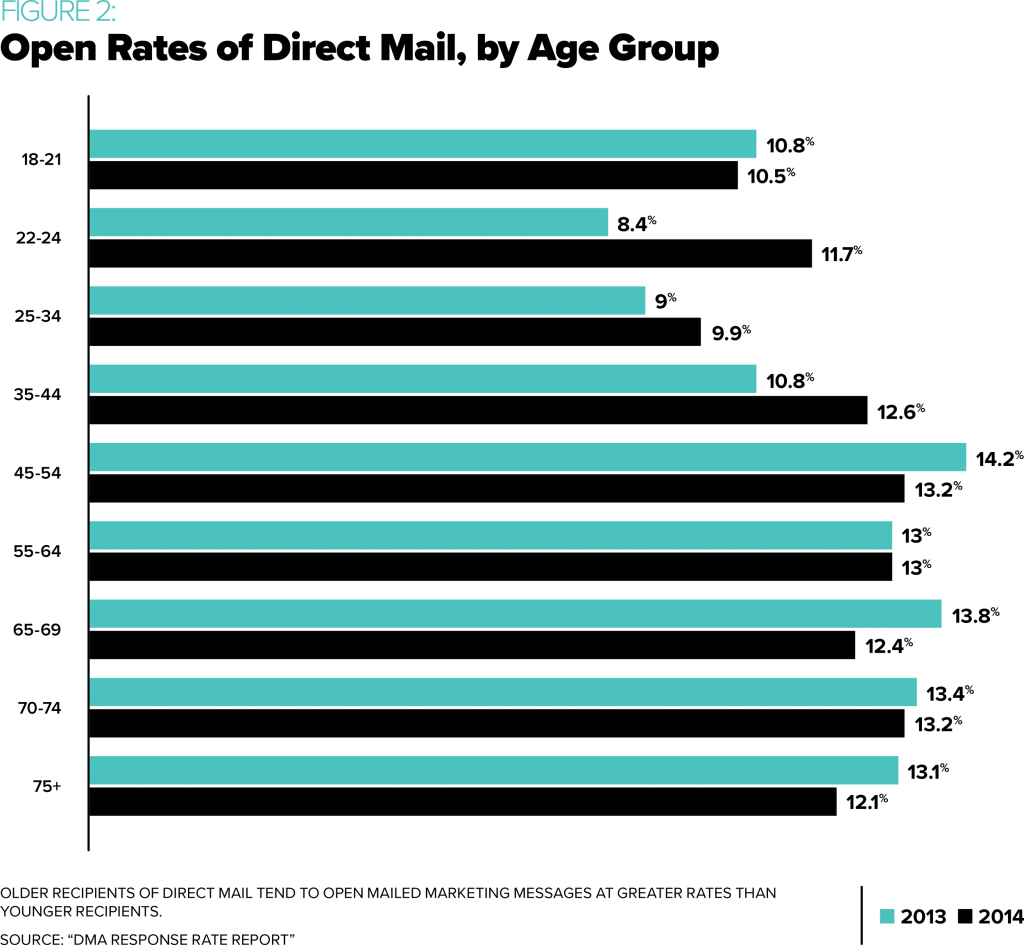 A DRIP CAMPAIGN DRIVEN BY DATA AND ANALYTICS FOR BIG WINS

To realize an effective campaign, Highmark was intent on sending mail pieces that looked and felt different, and would stand out in a crowded field. That meant using paper and die-cuts that were special and eye-catching, to break away from humdrum artwork, presentation, messaging and calls to action. The marketers hoped that dramatically distinctive components of marketing mail, in a systematic campaign of multiple touches, would prompt recipients to open envelopes, absorb the contents and respond in large numbers.

Digital variable printing options in the Heeter shop allowed for personalization that included a cover letter with salutations like “Dear Cynthia.” But digital printing also allowed for the personalization of unique-to-recipient bar codes and response phone numbers to accurately gauge impact and better capture leads.

In particular, personalization directly matched prospects with Highmark’s network of physical offices, where agents were able to reach out to respondents, understand their needs via the survey results, and provide quick, accurate counsel about how to enroll in appropriate Medicare programs. Move-update data keyed to individual recipients allowed Heeter to update its mailing lists in real-time, as people move from one address to another — an advantage only available to modern digital printing fed by updated databases. 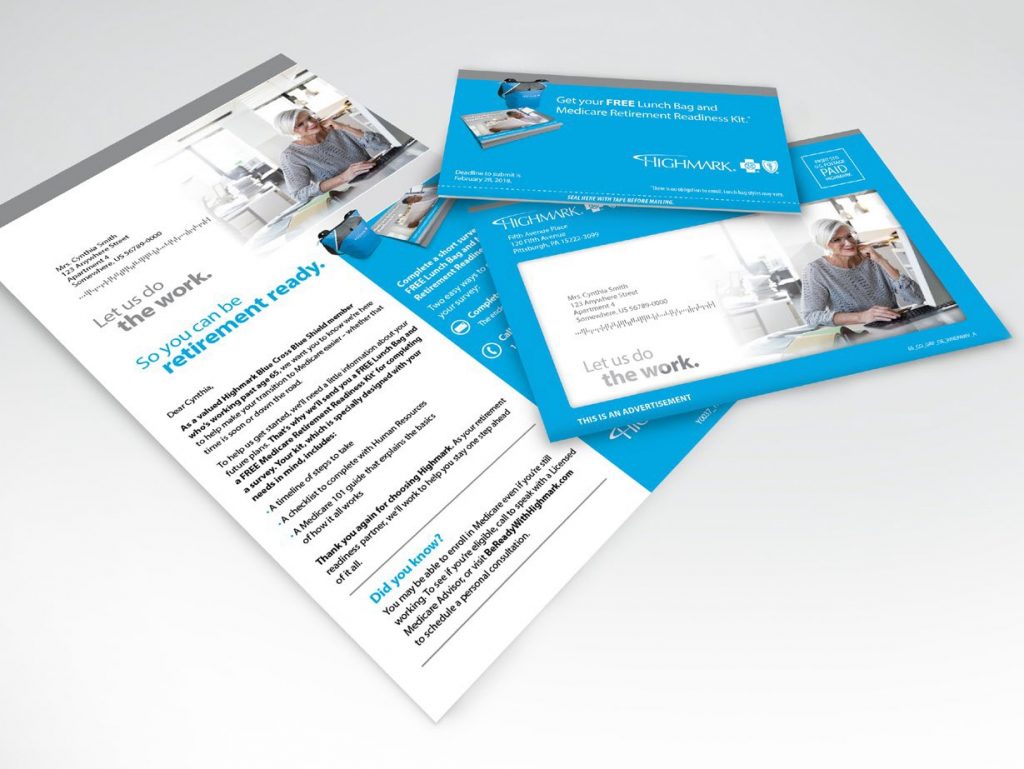 A/B testing helped refine the messaging, the types of offers, whether to use envelopes or self-mailers, and even what types of paper stock prompted the best results. Depending on which of the various mailings a recipient responded to, it triggered a follow-up piece more specifically tailored to that individual.

“Perhaps the biggest thing in working with Highmark Health was enabling them to see the specific advantages of data that can be used in direct marketing,” says Boyle. “The applications are very robust and you can do so much with them. It was all about putting great thought and personalization into signing up for a Medicare plan, which is both mundane and confusing. We wanted to get the recipients’ wheels turning.”

Highmark’s creative and production stood out dramatically among other Medicare providers, and aimed to be helpful, not promotional. Printed in full color, one cover letter stressed, “You can be retirement ready,” and offered a free “Medicare Retirement Readiness Kit” that explained the options available and critical timelines. It also included a checklist for those people still in the workforce to help them work with their human resources departments in making the transition. Along with the kit, the offer included a free lunch bag to further prompt replies, while other mailings offered things like free umbrellas or calculators. Offers also became more targeted over time, as analysis demonstrated which ones worked better than others and in which regions.

Calls to action included asking mail recipients to send back in a short survey, reply by phone or email, or attend free local events at one of Highmark’s physical centers to discuss Medicare options with a Highmark advisor. Further touches leveraged a gamut of available channels, including email and outbound phone calls. The ongoing campaign is now averaging about 10 touches per recipient in a variety of channels, but direct mail is still at the core.

Highmark’s essential message was and continues to be, “Let us do the work,” establishing relationships with recipients to help them negotiate the confusing journey through all the Medicare-related choices. It was a campaign to make Highmark beneficial first, in order to generate leads for later nurturing campaigns.

“Our revised pieces show a strong increase in engagement compared with the campaign we had been running, and with response rates jumping from 1 percent to 6 percent with the first mailing … We attribute a lot of that to the premium paper, disruptive envelope and hand stamping. The cost per piece is higher, but the cost per lead ends up being lower, simply because we are getting a higher response rate.”

AN IMMEDIATE AND CONTINUING LIFT IN CUSTOMER ENGAGEMENT

Highmark saw an immediate lift in engagement from its initial direct mail campaign. Response and engagement rates rose dramatically, in particular as the program became more refined and targeted in response to A/B testing and an analysis of what worked best, with whom and in which regions of the country.

“Our revised pieces show a strong increase in engagement compared with the campaign we had been running, and with response rates jumping from 1 percent to 6 percent with the first mailing,” says Hess. “We attribute a lot of that to the premium paper, disruptive envelope and hand stamping. The cost per piece is higher, but the cost per lead ends up being lower, simply because we are getting a higher response rate.”

Highmark’s “New to Medicare” campaign continues to use a variety of marketing channels, but Hess says, “Direct mail is still the best way for us to do highly segmented marketing outreach. We can provide the right content, at the right time, to the right customer. By having relevant direct mail content, it plays nicely with our other channels and they all truly complement each other.”